During a recent visit to the Philadelphia Museum of Art, I had a chance to pick up the new book, Edgar Degas:  Drawings and Pastels   (Thames and London Ltd., 2014), by Christopher Lloyd, formerly surveyor of the Queen’s Pictures in the British Royal Collection and a widely published author on Western art.  In an unusually crisp and absorbing writing style complemented with high-quality illustrations, this book traces the education and professional evolution of Edgar Degas, the artist, who lived from 1834 to 1917.  It is the story of how a naturally gifted individual moved from the bounds of convention, and the conventional, to create original ways to view everyday realities. Degas (seen below) was a compulsive draughtsman born in Paris into a cultured (and multi-cultural family) with close family relations in both New Orleans and Italy. 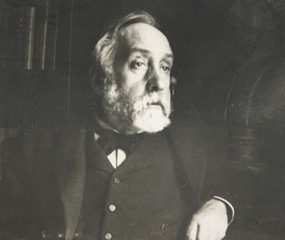 The poet and critic, Paul Valery, who knew Degas in his final years, said of Degas’ approach to art that:

“The sheer labour of Drawing had become a passion and a discipline to him, the object of a mystique and an ethic all-sufficient in themselves, a supreme preoccupation which abolished all other matters, a source of endless problems in precision which released him from any other form of inquiry.  He was and wishes to be a specialist, of a kind that can rise to a sort of universality. [emphasis added].”

Degas made a conscious attempt to select as role models artists from whom he thought he could learn the most.

He began his career as a painter of historical scenes then traditional in the art society of the 1860s, but it wasn’t long before his innately independent and original character took over and propelled him into uncharted domains.  Early in his career, he invested years to master the conventional approaches to drawing and painting as represented by the dogma of the Ecole des Beaux-Arts at the time.  Nonetheless, he demonstrated a lifelong loyalty to maintaining a distance and independence from the schools and art movements of his time.  Lloyd notes that Degas’ determined individuality and preference for  working within the privacy of his studio enabled him to “deploy his creative resources.”  Lloyd continues:  “It is as a result of his single-mindedness that he was able to experiment without fear of failure.”

The years of investment in first learning the technical skills as a draughtsman, focused primarily on copying old masters, were critical building-blocks to his later originality.  The approach of the Academie Royale de Peinture et de Sculpture, founded in 1648, set the standards for art education in Degas’ early years.  Its restrictive approach, according to Lloyd, “produced able draughtsmen, but did little to develop artistic imagination or encourage artists to engage with everyday life.”    The emphasis in the training was on the development of a superior drawing technique, not on originality.  “In short,” Lloyd writes,” to reproduce a work of art was considered to be more important than creating one.”

Degas from the start exhibited a flair for pushing the boundaries of convention.  Even his copies of master paintings revealed him to be actively seeking out alternative interpretations.  He himself said:  “The masters must be copied again and again, and only after having given every indication of being a good copyist can you reasonably be given leave to draw a radish from nature.”

According to Lloyd, Degas exhibited early interest in original methods, introducing the “essence” manner of painting–involving oil paint diluted with turpentine–in the 1870s.  He also had a habit, by the mid-1880s, of adding as many as five to seven strips of paper to his work mid-way through the process, something Lloyd notes that Rubens did in the 17th century “as though there was no physical limit to the boundaries of a composition.”  This was not due to an “initial misjudgment,” according to Lloyd, but because the compositions “grew in an almost organic way:”

“The physical nature of the creative process invests the whole work, therefore, with a kinetic energy of its own.”

Degas was pursuing a new type of art by the 1870s, a type which challenged the traditions of the times and sought to usurp the authorities of the Academie des Beaux-Arts.  Others with a similar aim to depict modern life in their art while experimenting with new styles and techniques included Monet, Renoir, Pissarro, Sisley, and Cezanne.  This was the period of the birth of Impressionism, and Degas participated in Impressionist exhibitions.  His work focused almost exclusively on contemporary subjects including scenes of the battle, horse racing, cafe-concerts, laundresses, and even criminals on trial, writes Lloyd.

Degas’s mastery of precise drawing combined with his capacities for acute observation and “remarkable powers of detachment” equipped him to document modern societal challenges in ways that his contemporaries, such as the novelist, Emile Zola, were doing in other art forms.  Degas’s capacity to depict raw scenes of what then were considered to be socially improper activities tended to shock the art critics of his time.

Like many artists and innovators before and after him, Degas saw new possibilities in everyday realities that others did not.  This book gives one an appreciation for the  conditions and natural endowments that enabled Degas to not only master the conventions of his time but to break with them in order to change contemporary expectations of art.

Such challenges and approaches seem just as relevant today, and upcoming posts will consider the how individuals in different fields are able to innovate in “mature organizations” and amid sometimes rigidly defined conventions.  In a turbulent, rapidly transforming world of paradoxically more frequent “rare” and unexpected “black swan” events, knowing more about how “serial innovators” succeed is becoming vital.  So this blog will turn to the book, Serial Innovators:  How Individuals Create and Deliver Breakthrough Innovations in Mature Firms, by Abbie Griffin, Raymond Price, and Bruce Vojak, (Stanford Business Books, 2012), for some meticulously researched findings on this subject.

One thought on “Black Swans and Serial Innovators”