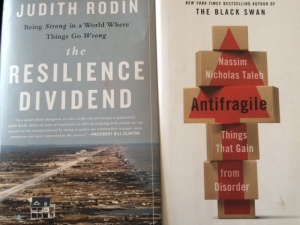 As the literature on “resilience” expands, some of the concepts addressed might appear to clash. This post will begin a look at some of these differences–to see if they really are differences. There generally is agreement, however, that the roots of resilience thinking are found in ecology and more broadly speaking the natural or biological sciences.  This material refreshes our understanding of the interactions of causes and effects in simple, complicated, OR complex systems, powerfully reminding those who are receptive that sometimes addressing problems with the wrong “solutions” or means can actually make them worse.

Judith Rodin, author of The Resilience Dividend, introduced in the previous post, examines the conceptual roots of resilience thinking in a number of fields.  She has interviewed many of the leaders in this arena, who represent disciplines as varied as engineering, psychology, business management, and city planning.  She reports that these people, while experts in their original fields, are “coming together into an approach to resilience building that can be broadly applied across many domains…as well as many scales…”

One of the experts she cites is Brian Walker whom she quotes as writing, “Resilience is the capacity of a system to absorb disturbance and still retain its basic function.”  A plant ecologist, Walker has come to understand, as Rodin writes, that “resilience is not about not changing.”  The forests and savannas that he originally focused on survive disruptions–such as fire, drought, development,and pestilence–only by changing.  Walker extended this thinking to include human systems.  Walker found that the “idea of retaining basic function through disruption”–when applied to systems of humans and nature–“has far-reaching consequences.”  As Rodin writes:

One of the consequences is that the “systems of nature and the systems of humans are very much intertwined, and the resilience characteristics of one affect the other.”

In engineering, too, notes Rodin, “the concept of shock absorption without basic loss of function is central.”  Quoting the director of international development at Arup, a global firm of designers, planners, engineers, consultants, and technical specialists, Jo da Silva, the experience of “witnessing how communities recover from physical collapse, such as the Indian Ocean tsunami, or social breakdown, such as the Rwandan genocide” influenced her thinking (and that of her colleagues) to move beyond the traditional paths of engineering to include social systems.

In psychology, as well, there are degrees of resilience, writes Rodin quoting a professor of clinical psychology.  In that profession, only fairly recently has there been a shift away from “dysfunction and pathology” toward “resilience and health.”  There are degrees of resilience in this area too:  some people will struggle more than others in certain types of disruptions.  A lot depends on the circumstances.

These findings are being integrated and adapted into other disciplines, according to Rodin.  “Resilience building is now on the minds of people in a wide range of other fields, including economics, sociology, politics, and governance, health care, education, theology, and the arts, and applied in the burgeoning industries of management consulting as well as personal growth and improvement.”

All of the disciplines at the root of the concept of resilience draw  on systems thinking, according to Rodin.  A system is “a set of interrelated elements that interact with each other within some defined boundary and are organized to perform a function or follow some purpose.”  Systems include the human body, a community, a computer network, a company, a city, and a society, according to Rodin.  An essential element of systems is “the feedback loop.”  The most simple feedback loop involves “cause and effect” closely related in time and space, according Jay Forrestor who founded the Systems Dynamics Group at MIT.  An example of this, he says, is warming your hands at a stove.

In complex systems, however, “cause and effect are not closely related in either time or space,” Forrestor writes.  “In the complex system the cause of a difficulty may lie far back in time from from the symptoms, or in a completely different and remote part of the system.  In fact, causes are usually found, not in prior events, but in the structure and policies of the system.”  According to Rodin, drawing on Forrestor’s work, complex systems, such as cities, “present to us things that look like causes but are, in fact, ‘coincident symptoms’.”  Because we are more cognitively prepared to expect simple cause-and effect situations, “we apply the same thinking to complex systems and, as a result, “treat symptoms, not causes.”  Forrester concludes, according to Rodin, that the outcome of doing this usually “lies between ineffective and detrimental.”  Rodin notes, for instance, that this is why–in the case study of Medellin, Colombia she examines earlier in her book–“Medellin could not break out of its cycle of violence and poverty” until it began addressing causes (such as neighborhood cohesion, transportation, education, access to basic needs, and other elements of the city system) rather than just symptoms.

The ecological roots of resilience thinking are identified with the work of a Canadian ecologist, C. S. Holling, who maintained that there are two different ways to look at natural systems–as either stable or resilient.  The former is consistent with a traditional engineering view of “consistent non-variable performance in which slight departures from performance goals are immediately counteracted.”  Like the plastic ruler which, bent and then let go, returns to its original shape.

The second view of systems, according to Holling, concerns a property termed “resilience” that is a measure of the persistence of systems and of their ability to absorb change and disturbance and still maintain the same relationships between populations or state variables.” This material is from C.S. Holling’s well-known paper, “Resilience and Stability of Ecological Systems,” Annual Review of Ecology and Systematics 4 (1973) and quoted by Rodin.  Resilience is not about “achieving permanent stability of some standard state but rather about “absorbing”change and disruption…and achieving a new state of stability,” writes Rodin.  Holling continues:  If we are dealing with a system profoundly affected by changes external to it and continually confronted by the unexpected, the constancy of its behavior becomes less important than the persistence of the relationships.”

In a world which some say is more disruptive, getting clarity about the meaning of these concepts is a necessary starting point.  Thus, the concept of “Antifragility,” as developed in a book of the same name (Antifragile: Things That Gain From Disorder) by former businessman and quantitative trader and current author and professor Nassim Nicholas Taleb, merits attention. For Taleb, “Antifragility is beyond resilience or robustness.  The resilient resists shocks and stays the same; the anti fragile gets better.”  In what ways is Taleb discussing the same concepts as Rodin, Holling, and others, and in what ways do his concepts differ? A future blog post will take this up.