So soon after winter has finally (we hope!) loosened its grip, it’s easy to appreciate a sunny spot, especially when there’s no need to rush off anywhere.  Just the other day, I had such a chance, and stopped to examine a fountain of unknown origins, or so it said right on the plaque fixed to its side. 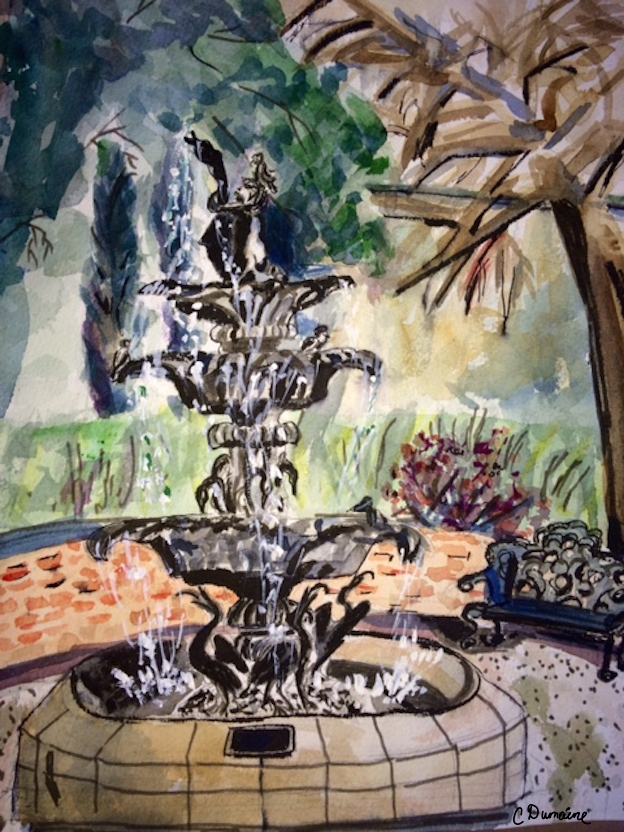 This fountain may date from the time of the Civil War in the U.S., but little else apparently is known about it.  Nonetheless, it clearly has a tremendous place in the present moment.  During the moments I was there, it sparkled and attracted the attention of all passersby, humans and birds.  All in cast iron, the sculpture is topped by a serpent-like fish held tightly by a toddler. Water spews upwards from the fish and then cascades downwards into the pool below.  As the water trickles and bounces on the way down, the whole black structure glistens with diamonds of reflected light.  Some of the spray glances off the backs of sharp-beaked cranes at the base of the sculpture.

Not far from some of the busiest avenues in Washington, D.C.,this fountain is tucked into an alcove with a backdrop of the high curved walls of the Hirshhorn Museum of Art and Sculpture. Nearby, the Supreme Court hears difficult cases, various agencies deal with the mounting complexities of governing, and streams of people hurry through the park to get back to their offices or the Metro.

Off to the side, here in this tranquil spot, I took some time to “capture information” about the fountain in the way some art teachers have recommended–looking for shadows, tone, and context.  Although the fountain’s history and name are unknown, I found that there is so much to record that I am going to have to go back and try again.  In addition, in the course of doing this, I learned about “urban sketchers” and look forward to participating in one of their workshops soon! Perhaps with practice, time, and more sunny days it will get easier to describe information visually.

This approach might be useful on a larger scale too. A recent piece in the New York Times, “Learning to See Data,” emphasized how businesses dealing with big data are turning to “conceptual artists” for help.  One artist quoted in the article recommended dealing with data through “frameworks of recognition” which he described as involving “how you choose to look, rather than what you are trying to see.” He noted that: “Scientists often think of visual images like graphs as the end result of their analysis. I try to get them to think visually from the beginning.”  Very interesting!  So, future posts will come back to these concepts.