Painting in the outdoors, or “plein air,” is a popular past-time for artists and great practice for everyone who wants to learn to appreciate their surroundings with new eyes. I am most likely to be found doing this on weekends when I have painting pals who want to be outdoors.  But a few (most, actually) of the people with whom I correspond do not have much time to paint whether in or out of doors, so I thought I’d write a post about what art is teaching me about readiness for the unexpected.

The other day, I found myself in a setting devoted to sustainable gardening and wild meadows where my subject turned out to be a small garden statue of the ancient Greek god of the wilds, fields, and flocks, Pan, with his man-like body and a goat’s hind legs.  The word “panic” is derived, I’ve since learned, from Pan’s name.

Illustration:  Photo of garden statue of Pan at the River Farm, Alexandria, Virginia

This subject promised to be challenging, especially given changing circumstances. Sunlight vied with overcast skies, changing the shadows on the figure every few minutes.  In addition, a wedding was scheduled for these very grounds in a short time, so planning ahead was of the essence.  First off was a quick sketch to familiarize myself with this scene, and gain some idea of lights and darks.

Such a sketch can boost confidence for the next step, though it is true that you never know how a sketch is going to turn out and many sketchbooks, like diaries, are private partly for this reason.  Nor, increasingly, do we know what we will face, so sketching (or  a rehearsal or a “scenario”of any kind) is a way to increase our readiness for the unexpected, a subject that received more attention in the early days of this blog.

Seeing Things Differently and Avoiding Panic  Learning how to see in different ways, sometimes very quickly–including connecting with others who see things differently–is fundamental to survival, not only for the artist.  It has been called various things including cognitive agility, mindfulness, and “rapid reflection.” But I’ve observed that it often doesn’t get the attention you’d expect for something so critical.  In fact, in too many places, people are incentivized to ignore the unfamiliar and to treat it as irrelevant until an altogether too-obvious change in the status quo forces (some of) them to reconsider…and sometimes that is too late.   (Even in the absence of crisis, such a disinterest in the world can harden into a lack of curiosity which calcifies one’s situational awareness at a dangerously low level.  This has proven in the past to be particularly bad for living species of all kinds–not to mention modern-age businesses–and is especially risky in today’s world where we–and all our things, such as watches, cars, and phones–are more interconnected than ever before.)

Topping off this day  of plein air painting was the opportunity to see the movie, “Sully,” on the inspirational pilot and the first responders on that incredible day when a fully-loaded passenger plan had to land on the Hudson River.  From painting Pan in the wilds, I was confronted with wild scenes that would leave most of us panic-stricken if we were in the midst of them.

But this is a film of human strength and prowess, strong team work, and genuine leadership.  From the pilot and his co-pilot, to the crew, the ferryboat operators, air traffic control, and many other responders, the rapid response to this unprecedented event demonstrated the value of consciously preparing (across disciplines, stovepipes, and other boundaries) for the unexpected.    In this case, one imagines that such pre-crisis teamwork contributed to enhancing preparedness for an unprecedented situation.  Remembering the importance of the  “human factor”, as per Sully when he explains himself to the NTSB (National Transportation Safety Board), is the critical difference.  His performance seems to be an example of “rapid reflection” crisis management in action; this film carefully adheres to the facts of the crisis as it actually unfolded and, therefore, truly is a “must-see” for all those in top management, whatever the field.

In an age when many clearly believe it is more acceptable to bash experts than to emulate them, the aspiring artist knows that study of others’ solidly perfected techniques–and, beyond this, historical appreciation as to what has been humanly possible and achieved over time–leads to greater consciousness of our individual shortcomings and more rapid recognition of the truly exceptional (as the film, Sully, also reminds us).  Recognizing these gaps can inspire us to be more curious and to learn more.  At the same time, experts themselves must prepare for circumstances never before seen (and, thus, for which there is no sketch, textbook or field of expertise). Indeed, a certain cognitive and doctrinal flexibility seems necessary, at a minimum, lest very deep expertise lead us to think that everything can be scripted, measured, and predicted ahead of time–as the differences between the NTSB and Sully demonstrated in the film.

The artist with skill in applying paint (or ink or any other medium) to paper or canvas–and expertise such as pilot Sully’s extraordinary tacit knowledge of the limits of his airplane, his ability to derive quickly from different inputs the most sensible course of action, as well as his abiding awareness of the value of human life–demonstrate human capacities  that total reliance on computers, for instance, or checklists can never achieve.

So, while it is true that you generally don’t want the pilot of your commercial jet to be creative in getting you from point A to B, the movie, Sully, does show us that adaptation in the face of the unexpected requires a degree of mindfulness  (and openness to ongoing learning) that cannot be assumed.  At their best, therefore, artists and experts of all types, whether commercially successful or not, seem to combine deep knowledge with a degree of cognitive flexibility that is hard to sustain from deep within “stovepipes” of all types, from academia to industry.  Dealing effectively with this conundrum seems to me to one of the most important things we could do these days.

During a plein air competition this week hosted by The Arts of Great Falls, Virginia, I had the opportunity to work on the grounds of one of the top French restaurants in the Washington, D.C. area, L’Auberge Chez Francois. 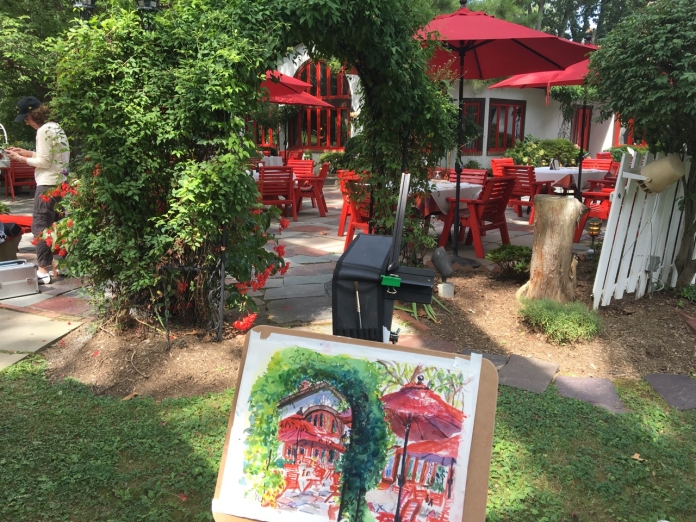 Braving unseasonably hot days (over 90 degrees!)  was made easier by the very attentive staff of this deservedly highly-rated restaurant, who came outside to the patio dining area several times to offer a cold glass of sparkling water or iced tea. This was very thoughtful, and probably outside their job description as their paying customers were inside the air-conditioned restaurant.   As it happened, I had my own ice water with me so did not need to accept their offers but their hospitality made what could have been a somewhat uncomfortable setting (due to the heat and occasional biting bugs) more pleasant.

The competition continues (and ends) today but a day already in this heat has left me content to submit only this one watercolor now on sale at the sponsors’ art gallery.  (There is something satisfying about going straight from the field to a gallery even if it is not a juried exhibition!)

Illustration: Watercolor as a work-in-progress by Black Elephant Blog author

This experience is yet another reminder that ‘plein air’ is dominated by oil painters, it seems.  The history of watercolor’s admission into the ranks of accepted mediums for serious art is a fascinating one on which I started a blog post some months ago, and may try to finish soon.  These on-site ventures out into the world of artists (and gracious restaurant staff) are fun tests of one’s ability to frame and execute a concept quickly.  My approach was to go out one day and scout the place for a scene, and then to sketch it in pencil.  The following day I set aside three hours to do the watercolor.  My hope was that the white tablecloths of the scene would provide a brighter contrast; the end result was less effective in this regard than I wanted, but dissatisfaction can be a powerful motivator.  In any case, I popped it into a frame and the sponsors now have it on display.  How fun!  And I will be happy to take it home again, if it doesn’t sell,  as a memory of this experience.