While preparing for a presentation (and a little book stemming from it), and doing some color studies for sketches to accompany them, the news has continued to be very distracting as it is presumably for everyone. In the last 24 hours alone, from a journalist sent crashing to the floor allegedly “body slammed” by a person aspiring to elected office (or is he already in office?)–to confirmation from the CBO (Congressional Budget Office) that the health of our nation is going to take a huge body blow if the latest health care plan is passed–to disconcerting news about NATO (also “body slammed?”), it is tough to keep one’s eyes on the task at hand.  But perhaps the combination of these colliding impressions is good for something after all…

In sorting through older material, I came across the famous “boiling frog”–a metaphor, of course, for not noticing when there are gradual changes in your surroundings, until it is too late.  According to the metaphor, a frog in a pot of slowly heating water will not react quickly enough to save himself and will eventually die.  (This is literally not true; the frog will jump out if he can, apparently.  I myself have not tested it, but I respect scientists and experts and they have). 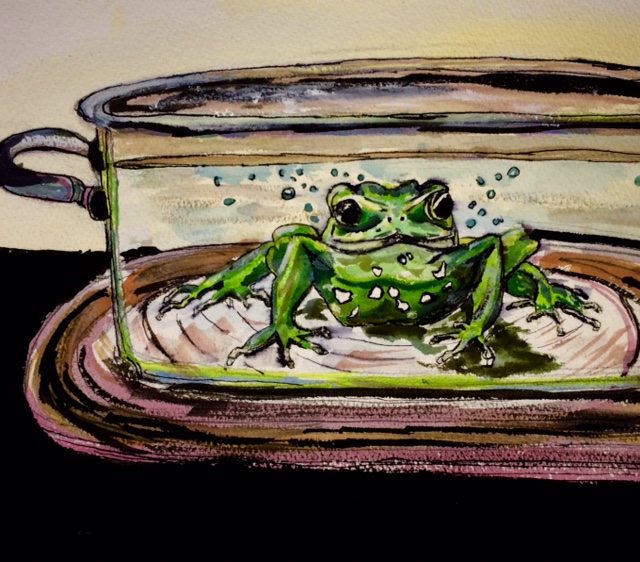 This is a week too in which we have heard the word “suborn” used in open testimony. It’s a useful word.  It seems related to another one rarely heard:  “inure”, which the dictionary defines as “becoming accustomed to something, especially something unpleasant.”  (Perhaps this is a good time to recommend a currently best-selling new little book, available on Amazon for less than $6:  On Tyranny:  Twenty Lessons From the Twentieth Century,” by Timothy Snyder, a professor of history at Yale.)

With so much coming at us almost hourly, it sometimes seems like the fate of the world is being decided right now. 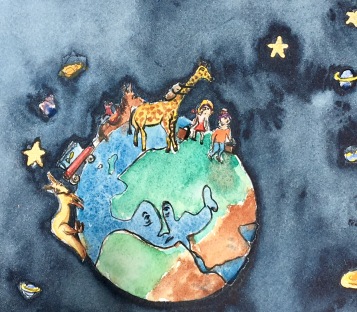 Illustration: Color study, Watercolor, acrylic and gouache, “Where Do We Go From Here?” by Black Elephant Blog author (2017)

People are tired of being distracted by it but the most conscientious know that too much is at stake to turn away. Much as we might like to, we can’t tune out what is going on because it’s unfortunately true– the fate of the world is being decided right now.  And if we tune out, we will surely not be as fortunate as the sensitive frog who manages to escape the dangers of his warming world.

So, we must not become inured to the bruising pace of the news cycle.  It seems to me essential to find ways collectively to both deal with every incoming distraction and yet look beyond it to make sense in time of where we are going and might wish to go instead.

Momentous times indeed, but I have faith we will prove to be at least as smart as  frogs.  So back to the drawing board…