Lazy days of summer continue with brilliant light and colors to challenge aspiring artists, some of whom gathered yesterday near Violettes Lock in Maryland, roughly a half an hour’s drive from downtown Washington, D.C..  The lock is one of about 75 locks, which were used in the 19th century (especially before the advent of the railroad) to regulate the amount of water coming into the C&O canal (which stands for Chesapeake & Ohio).  The canal used to be a major waterway for transporting goods between Washington, D.C. and Cumberland, MD and the main cargo tended to be coal from the Allegheny Mountains, according to Wikipedia.  Today it’s mostly a scenic route along the Potomac River for weekend hikers, bikers, and dog walkers.

At Lock #23, named after the last lockkeepers, the Violettes, to work here, there is a gently sloping patch of ground into a large, calm body of water, which obviously is a popular spot for kayakers , other boaters, and the occasional fly fisherman as seen here.

The colors of the scene changed frequently over the course of several hours, as boaters arrived and departed from the rocky little beach in front of me.

I saved the watercolors for later, finding it a challenging enough scene to do in ink only while at the site.

A very snowy  week is coming to an end, leaving wonderful winter scenes in its wake.

With so much closed due to snow, there’s been time to experiment with night scenes in watercolor and to give “hot press” watercolor paper a whirl. It took a couple of tries to start to get the hang of the paper, with its smooth surface, but it’s fun.

If you know about Rembrandt, you probably know about bistre ink. This ink was the go-to ink of the masters so when my bottle of it arrived in the mail all the way from Germany the other day–the same day I looked again at the John Singer Sargent oil paintings on display at the National Gallery of Art in Washington, D.C.–of course I had to test it out almost immediately. (The figure in my sketch, which I did first in pencil at the museum, is looking at the viewer–which is NOT what she is doing in the John Singer Sargent painting–there, she is looking away, as if ill or disconsolate.)

The ink is delightful, as I discovered when  combining a wash with using a pen and nib to try to recreate–inevitably way imperfectly but what is life without a challenge!–the feeling the Sargent created in his oil painting of “Repose”–reportedly done at a time when he viewed portraiture as a “pimp’s profession”–so this was his rebellion against formal portraiture.

Anyway, imagine traveling without all the acoutrement of a watercolor kit–just a bottle of this ink. The possibilities are really amazing! 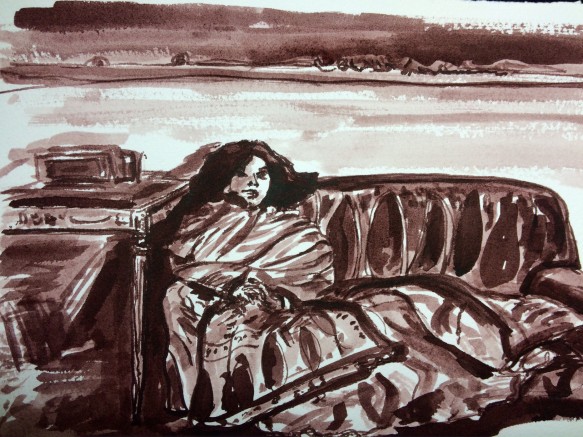