Today with all the last-minute Santa things to do, there was time to keep working on a painting I started this weekend.  Perhaps it will be dry in time to fit into a wooden frame and be wrapped to go under the tree too. 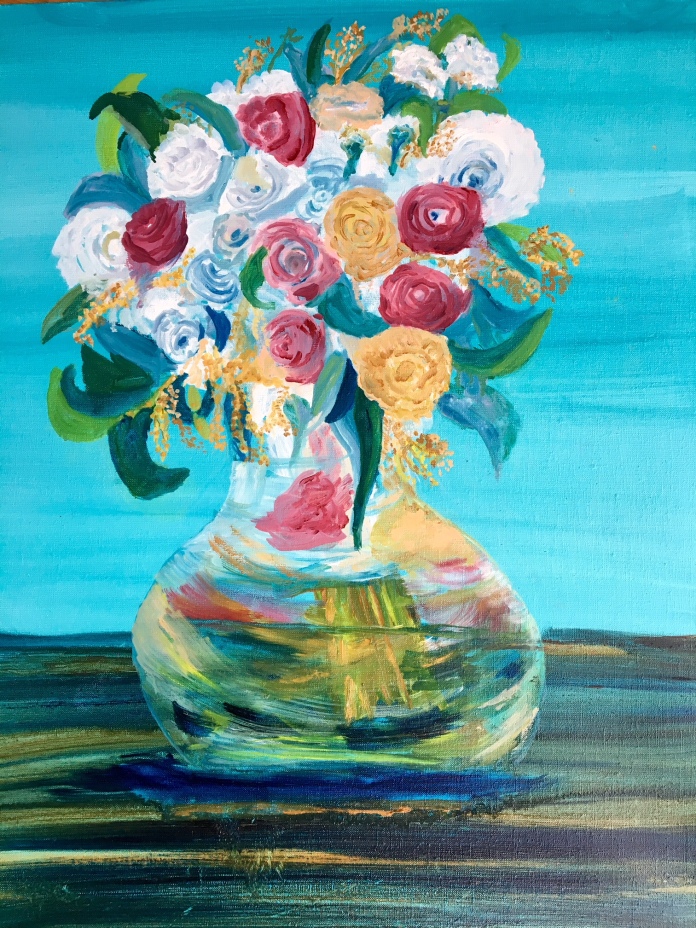 Painting in oil is still a challenge for me, mainly because of the brushes which become gooey, and sometimes even clumpy, pretty quickly. There’s also the problem of what to do with the gooey water mixed with solvent when cleaning the brushes. There’s still so much to learn but I do know that watercolor is quite a bit simpler, at least in terms of equipment.

Speaking of which, my Christmas present to myself arrived last week, and it’s a great addition to my collection of watercolor palettes.  This one, called the “Portable Painter“, shows what a clever design-oriented mind can achieve when taking time to really study how people are trying to use existing tools (in this case other palettes meant for watercolor painting in small formats outside). This palette is so well-thought out it is amazing.  I say this as someone who has used about 20 different alternatives in the past three years.  It comes with a small brush (with a smaller brush inserted into the handle) but neither brush is really suitable for most painting, and that’s the only negative I can see in this little kit.

This palette is perfect for the outdoor watercolor sketcher and I’ve already put some of my favorite paints into the pans.  Further description of this fantastic discovery will have to wait, as it’s time now to get some presents wrapped!  Happy Holidays and Merry Christmas and Happy New Year!

When one is accustomed to watercolor painting, experimenting with oil paints is initially frustrating.  There are a lot of differences and one is that it’s a whole lot messier. There must be a method to your madness too, or the colors will quickly become muddy from careless mixing and intermingling of brushes.  I set myself up with some Gamblin oil paints, which came with a handy 6″ x 12″ wooden panel.  I used this panel as my first surface (seen below). It’s easy to see how (and why) one could spend a lifetime trying to master this. As with watercolor, however, there is a difference between somewhat heavy-handed applications of paint, and a lighter hand.  It’s all going to require a lot more experimenting… 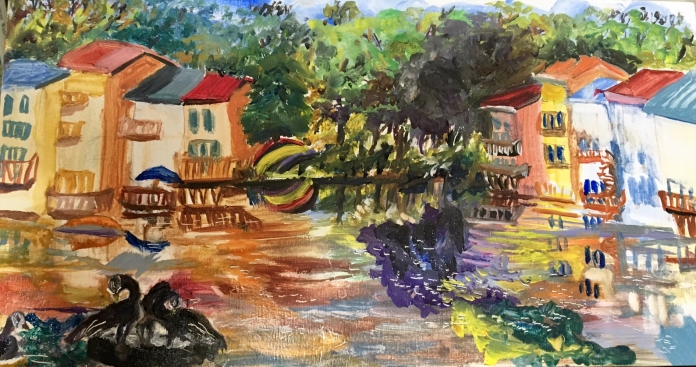 As to this image, it sprang to mind when I faced off with the blank wooden panel. While out taking a walk recently, I noticed that a nearby fountain is currently undergoing maintenance and our ubiquitous Canadian geese were resting on it in the middle of the lake.  This became my subject.  But remembering what Canadian geese look like proved harder than it should be–given that there are so many in this area that groups of them waddle through parking lots in search of food.  So I went out and looked at them again! 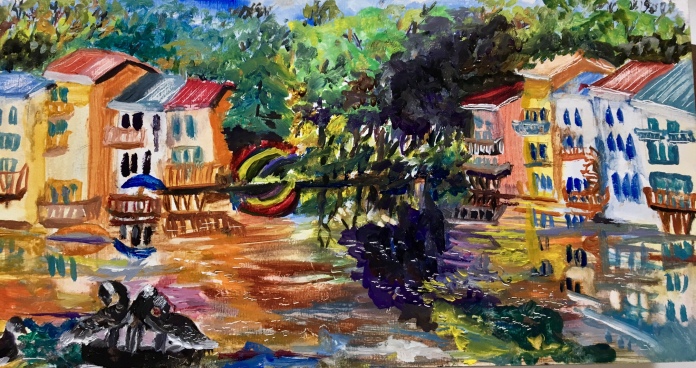 A “touch up” later and the whole thing got still more complicated; (maybe this is like revising an already unacceptable healthcare bill).  When I start over next time,  I will try to stick with simple shapes, and see what happens.  Anyway, this is welcome distraction from the just-announced “healthcare” bill which, if passed, will cause immense damage to this country, apparently intentionally so!

A brief break from the easel to check the news online… and what do I see?   Video clips of U.S. Capitol Police trying to carry elderly and apparently disabled people out of the halls of the U.S. Capitol…   This is not very positive imagery for the erstwhile “leader of the free world” clearly.   Evidently these people had gathered there at considerable personal effort, in wheelchairs and on canes, to protest the secretly cobbled-together “healthcare” bill that will throw all of them out onto the street.  Here they were being picked up off the floor to be carried out to the street…how symbolic of the new government approach to people in need.  These are exactly the type of people who will be harmed the most if this bill passes, as major insurances companies warned again just today:  The proposed bill will most hurt “74 million low-income, disabled and elderly Americans whose health care coverage through Medicaid” depends on Congress’s next moves.  Right now, their obvious preferred option is to make the rich richer, and let the less fortunate fall through the widening cracks, come what may…  What kind of policy-maker thinks this way?

Ironic that Canadian geese must have determined this is a better place to live when, at least for American people (except for the famous “1 %”), it will become much more difficult in the U.S. in the years ahead. That is, unless we suddenly see an outbreak of forward-thinking readiness to consider the public good  among the people’s elected representatives–thinking that is not much in evidence, tragically.   They cannot connect the dots between the public good and national and global security, obviously.

As I turn back to the easel, I think about what I just saw:  U.S. Senators are embracing a bill that the U.S. President has described as “mean” even as he urges them to pass it without delay. It’s not making America great apparently that is the goal, but making America “mean”?  How could this sort of thinking possibly prepare this great nation for the unprecedented challenges rushing headlong at us, irrespective of our political leanings, in the years just ahead?  Clearly making sense of the news is harder than painting in oils.  I’ll stick with the task at hand…for now.