Already the week is nearly over and it’s been quite full, making it impossible to get through the nearly 500 pages of the new book, The Shape of the New: Four Big Ideas and How They Made the Modern World. At least, I’ve made it through the section on Adam Smith, and partially through the section on Marx.  Still to come are the chapters on Charles Darwin and Thomas Jefferson. Amid warnings in the media about the state of the global economy, and on the heels of the UN General Assembly Meeting focused on sustainable development goals, it seems safe to say that this book is super timely. It’s clear that it’s well-written and thoughtful, making one want to know how the authors bring it all together in the end. It’s just that, with the spectacular weather we’ve been having, it’s been hard to avoid the stronger pull of the outdoors, and some very special sketching opportunities. 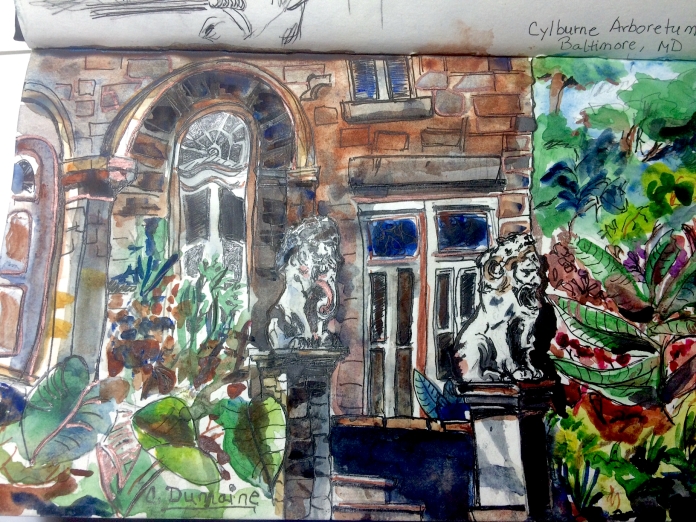 Apropos of the “shape of the new,” one of the sketching sessions this week occurred alongside the Cylburne Mansion in Baltimore where a metals magnate during the “Gilded Age” in the late 19th century built his home. Situated today on a large parkland which comprises the Cylburne Arboretum, this is a spectacularly beautiful place, where flowers and trees are abundant and crowds non-existent.  As one reads in The Shape of the New, the onset of the Industrial Age which gave rise to a new elite made mansions like this one possible in the late 19th century.

The Freer and Sackler Galleries were another stop earlier in the week on an equally majestic day weather-wise.  There is a small exhibit about the ancient city of Palmyra–once known as the “city of palms”–in modern-day Syria, there. It is impossible not to reflect on how the antiquities so recently destroyed managed to last, outdoors no less, for nearly two millennia up to our present times. 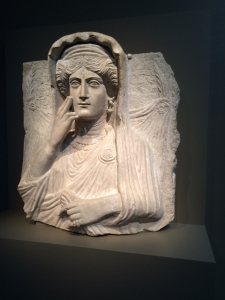 Illustration: Photo of the sculpture of Haliphat

Here it is possible to wonder where the shape of the new is headed.  The lone statue of an elegantly dressed and wise-looking young woman, known as “Haliphat,” seems to be trying to tell us something across the ages.  Unlike so much in Palmyra, she survives, here in this exhibit, so we may yet learn what this statue conveys across nearly 2,000 years.

On the way out, a muscular statue of a guard towered over us, and seemed to demand to be sketched.  He represents one of two guardians (the other was positioned at the far end of the hall) of Buddha and hails from the 14th century.

A subsequent post will return to The Shape of the New. 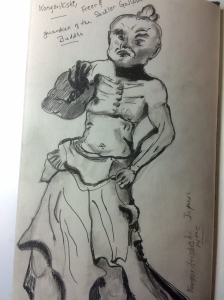